Being a Police Officer I read all of the books written by Joseph Wambaugh. One of his books was titled "BLUE KNIGHT". When I purchased my Catalina 36 in 1986, it only stood to reason to name my boat "BLUE KNIGHT".

I am a retired professor of English and literature. My boat is named for the skylark in Shelley's "To A Skylark." The poem begins "Hail to thee Blithe Spirit. . . ." The aura of mystery and mastery that surrounds the bird in the poem inspired me in naming my boat. My 1999 C36MkII is the second boat that I have named Blithe Spirit. The first was a 1984 Pearson 34. Roland Burns #1762

When I was a youngster, one of my boyhood heroes was a German World War I sailor named Felix Graf von Luckner who with his three-masted sailing ship called Seeadler destroyed a lot of tonnage without the loss of a single life. After the war he wrote three books about his exploits and went on a tour of speaking engagements around Europe and America. He was very popular in the USA, particularly New York. Because Graf Luckner was my hero, I always had wanted to name my first son Felix. However,.....

First let me say naming Magic III was easy. It was named after Magic II; which was named after the original Magic. The progression was Sunfish, Rhodes 19, Pearson 26, Catalina 30 and my present Catalina 36 . The first two were nameless. Which boat did I love the most? Can not say; I was completely obsessed and loved every one. As a kid in grade school in the late 40’s I would draw pictures of sail boats during class (maybe that is why I am a lousy speller). Also I would draw detailed pictures of dog fighting fighter planes. I even drew a design for the atomic bomb.

Our Catalina 36 MkII (#1928) had to be renamed, after three years of carrying the name of the company of which she had served the CEO. In the same rhythm of the name 'Catalina' we re-baptized her 'Atalanta': the butterfly (also known as the red admiral) dancing smoothly through the waves. 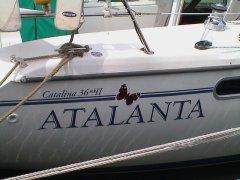 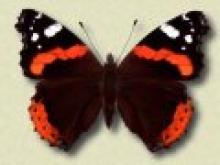 Shortly after buying our first-ever boat in May of 2004 (1999 Catalina 36), I wanted her to have a new name which reflected us personally. My wife's name is Diane and her friends and relatives usually call her Di. Because she has been called "spoiled" by those same folks, she also acquired the nickname "Diva." Our boat has recently been rechristened, "Diva Di" because I figure that both our boat and my wife compete for all my time and money ;) - Duane and Diane Ising

"Amante" in Spanish, and maybe Italian, means "mistress," or "lover." My wife's, Ana Maria's, native language is Spanish, and she names our boats. One of her favorite sayings is, "If your husband must have a mistress, it's best if she's made of fiberglass." Hence the name. - Fred Jackson

With a name of "Changes In Attitude" being a Jimmy Buffet fan is a given. When we bought the boat, her name was "Attitude". During a discussion with my wife Carolyn concerning keeping the existing name or changing it to "CARO II" (CARO was our first Catalina, a 25), my wife suggested adding "Changes In" was the obvious answer since I was such a JB fan. My mind said "duh, I should have thought of that". Interestingly enough, there is another C36 on the Neuse River in Oriental, NC, with the same name, and we know the owners, although that didn't come after we had bought and re-named CIA. 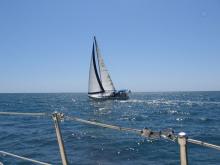 I was in the Navy for 30 years. The last 10 of which I was a Captain. Over time, like it or not, I acquired the nickname "Captain Kirk" - even though I was not a Star Trek fan. Five years after retiring from the Navy we bought our secong boat. The PO had a name that was not appropriate for us, so we cast about looking for a name. Many ideas were discussed and cast aside. Finally a family member came up with "Enterprise, you know Captain Kirk and all that ..". I groaned, but the deed was done.

Loving the camaraderie that sailing brings, and the old TV show...its the place where everybody knows your name.