Engine Upgrades for MK I

Our 1984 MKI with M-25 Universal was equipped with a Yanmar mixing elbow, we're not sure if this was original equipment or a mod from a previous owner.  Most likely the latter, since the mixing elbow seemed prone to clogging and we had issues with overheating anytime we ran the engine over 1800 RPM it seems hard to believe it was original.  At the same time, the engine had the original alternator bracket which is apparently prone to catastrophic failure (even though it lasted this long).  So we decided to bite the bullet and take on these projects.

Here is the layout with the old Yanmar mixing elbow (we had previously replaced the old heat exchanger with a larger new one).  To make it work, the exhaust hose had to make a pretty severe S bend which no doubt contributed to the exhaust issues and overheating:

The repainted exhaust manifold installed and ready for the new exhaust riser to be installed.  We took the opportunity to touch up as much of the rest of the paint as practical.

With the new riser in place, the engine runs much cooler with more consistent water flow.  Even at 2000 RPMs for as long as cared to, the temp holds at 175.  Mission accomplished!

And finally, what might have been the hardest part of the task, replacing the ratty old engine sound proofing.  It took two kits plus extra fasteners and a lot of effort cutting the foam but it sure makes a big difference in the sound levels with the engine running.

The next big project will be to replace the engine wiring harness. . . 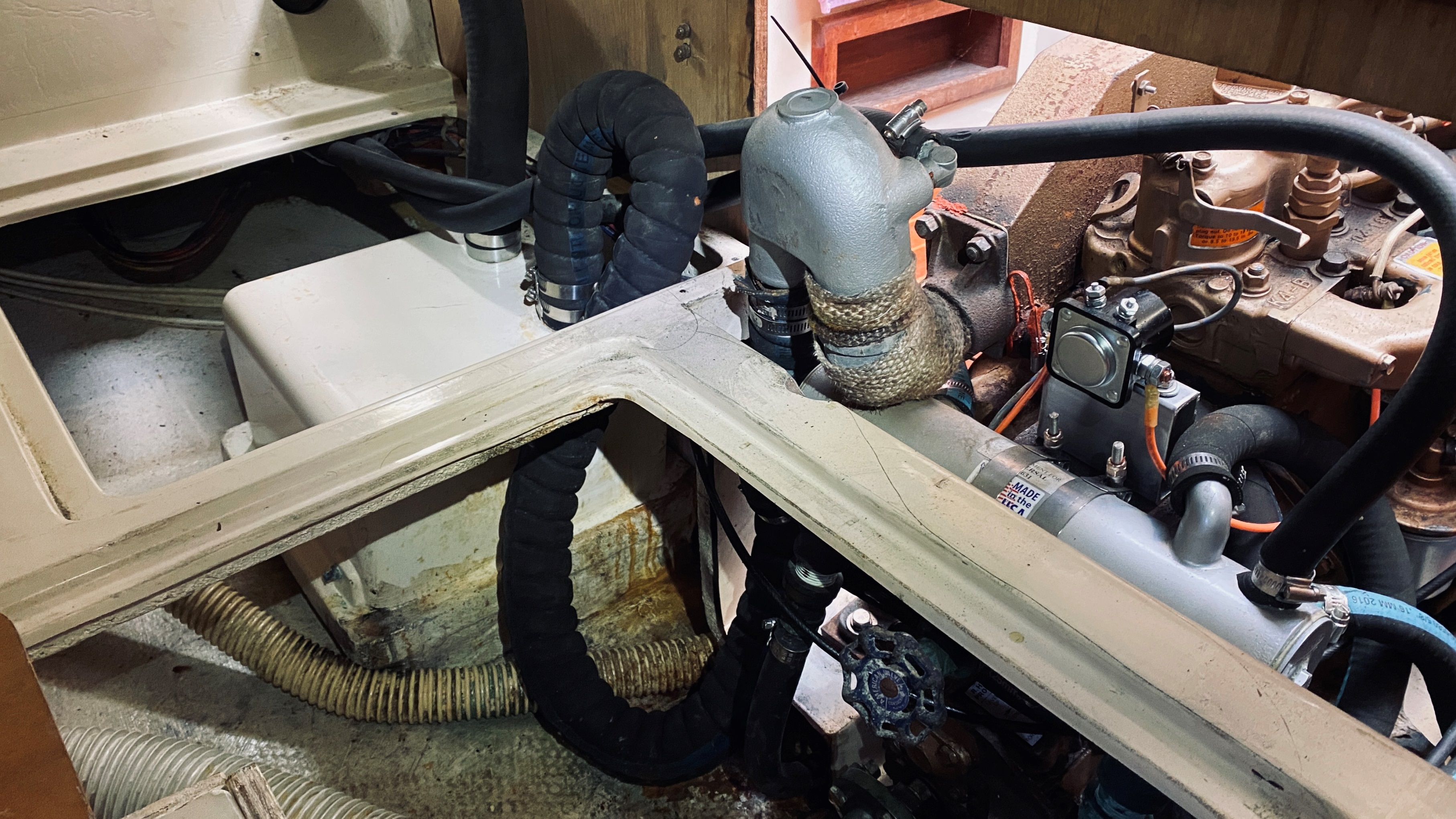 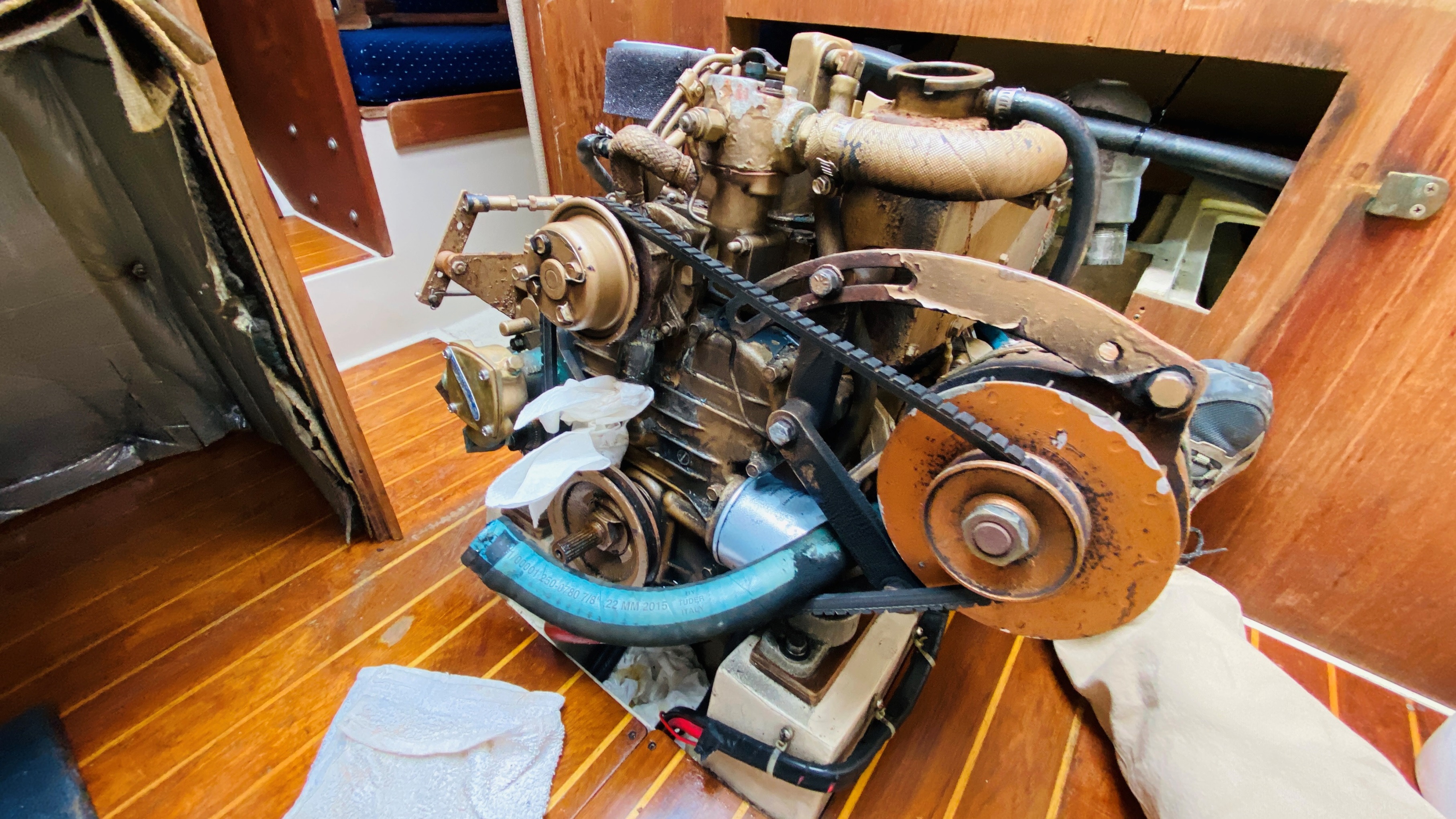 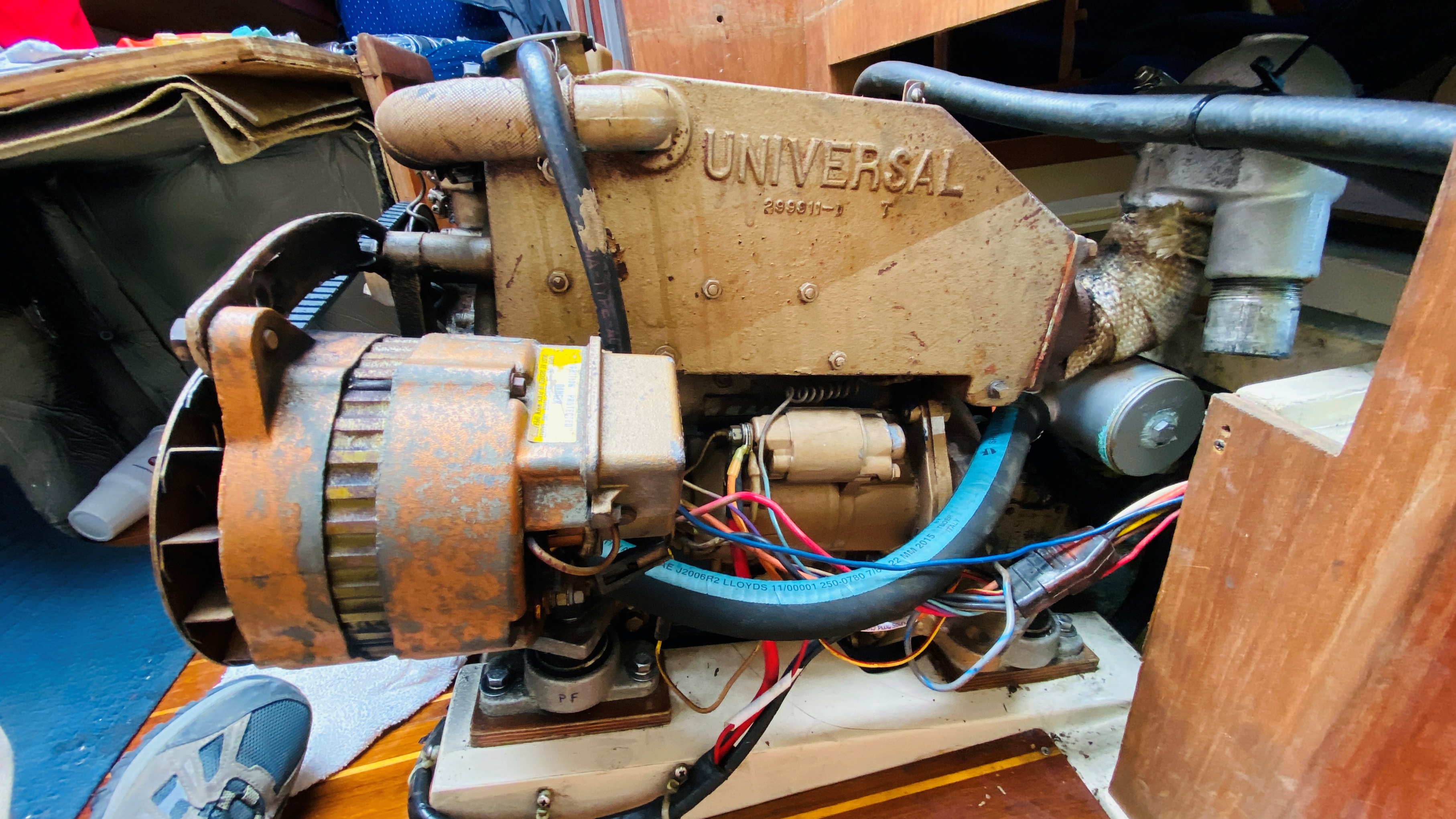 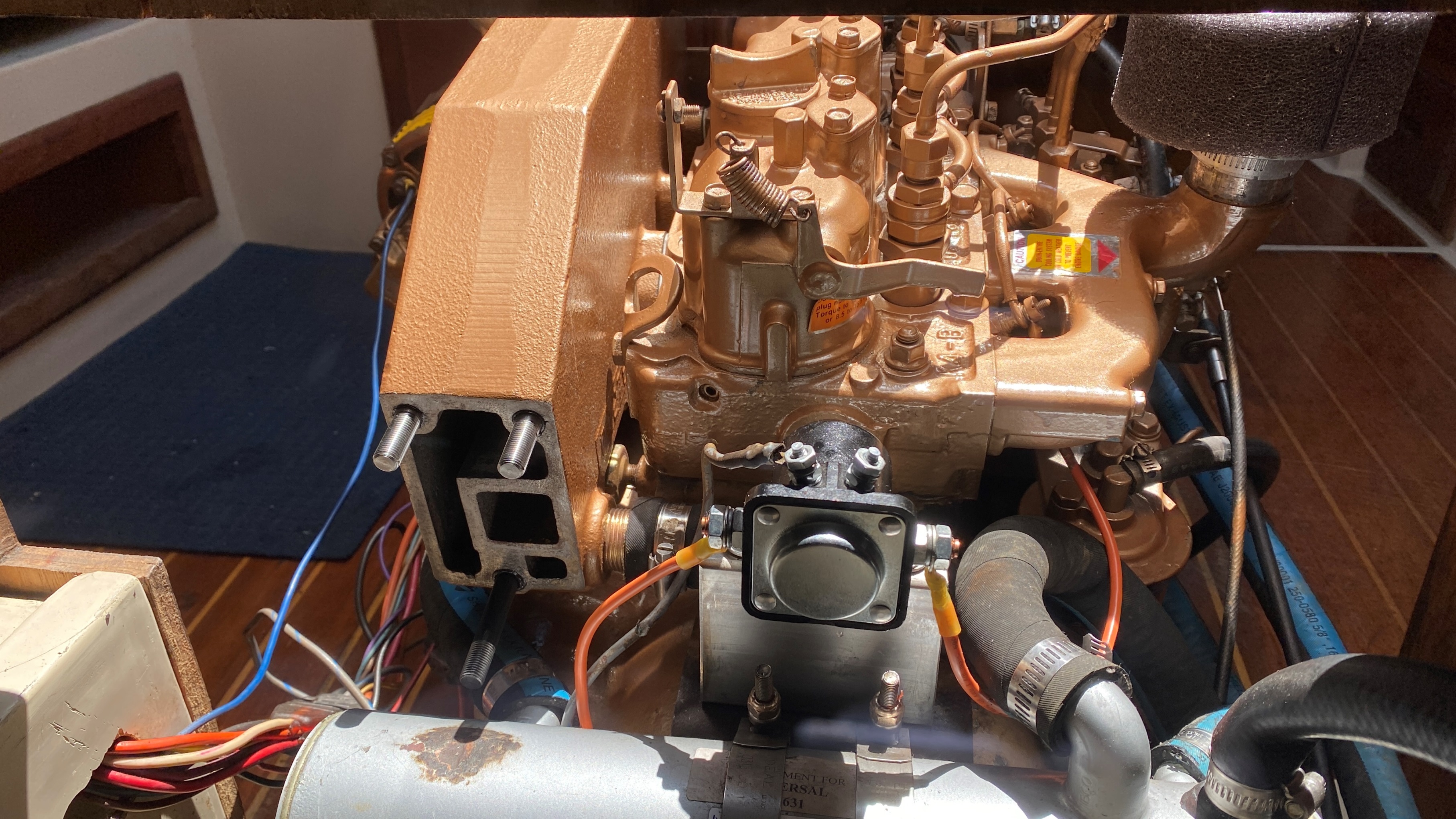 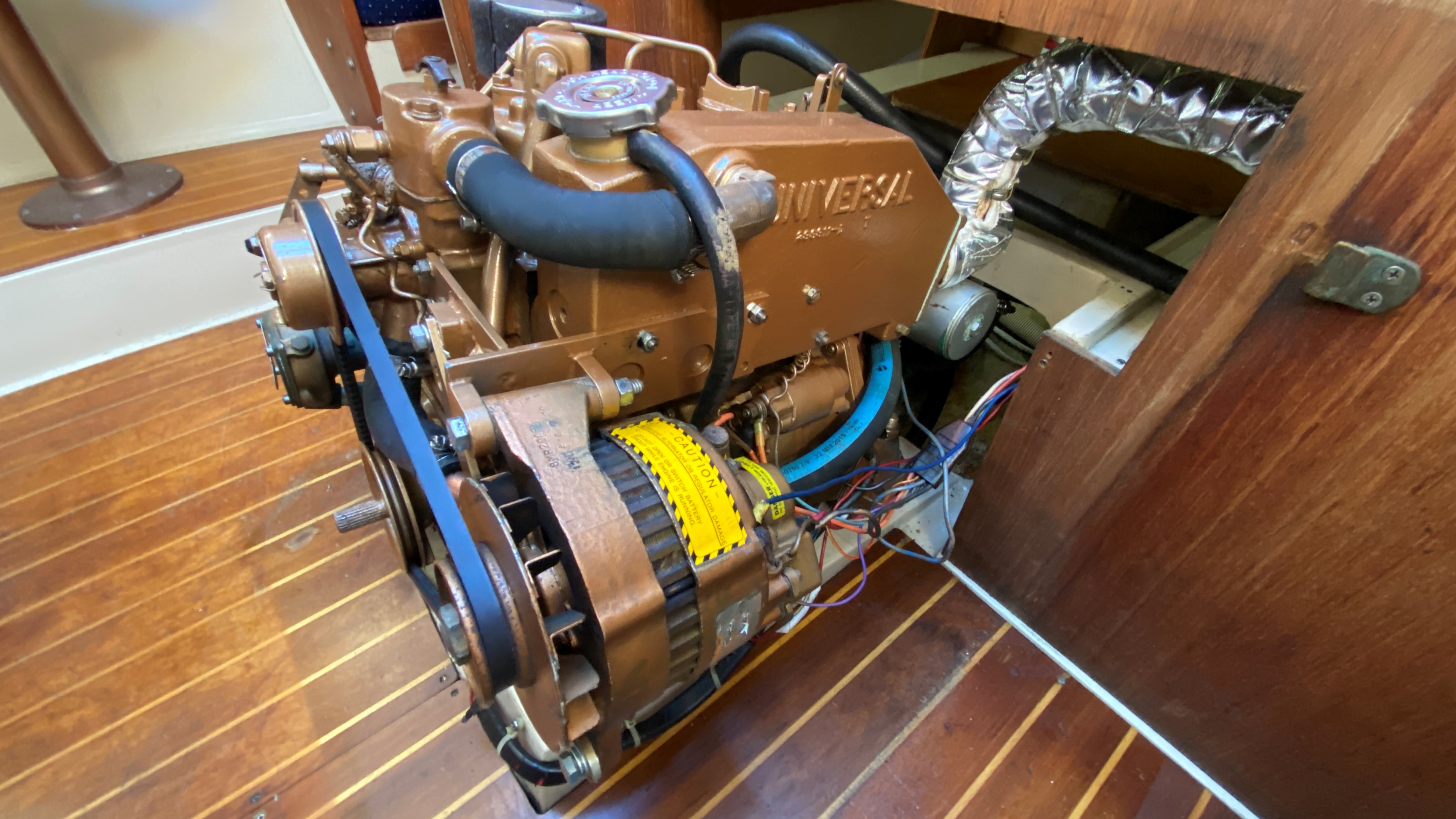 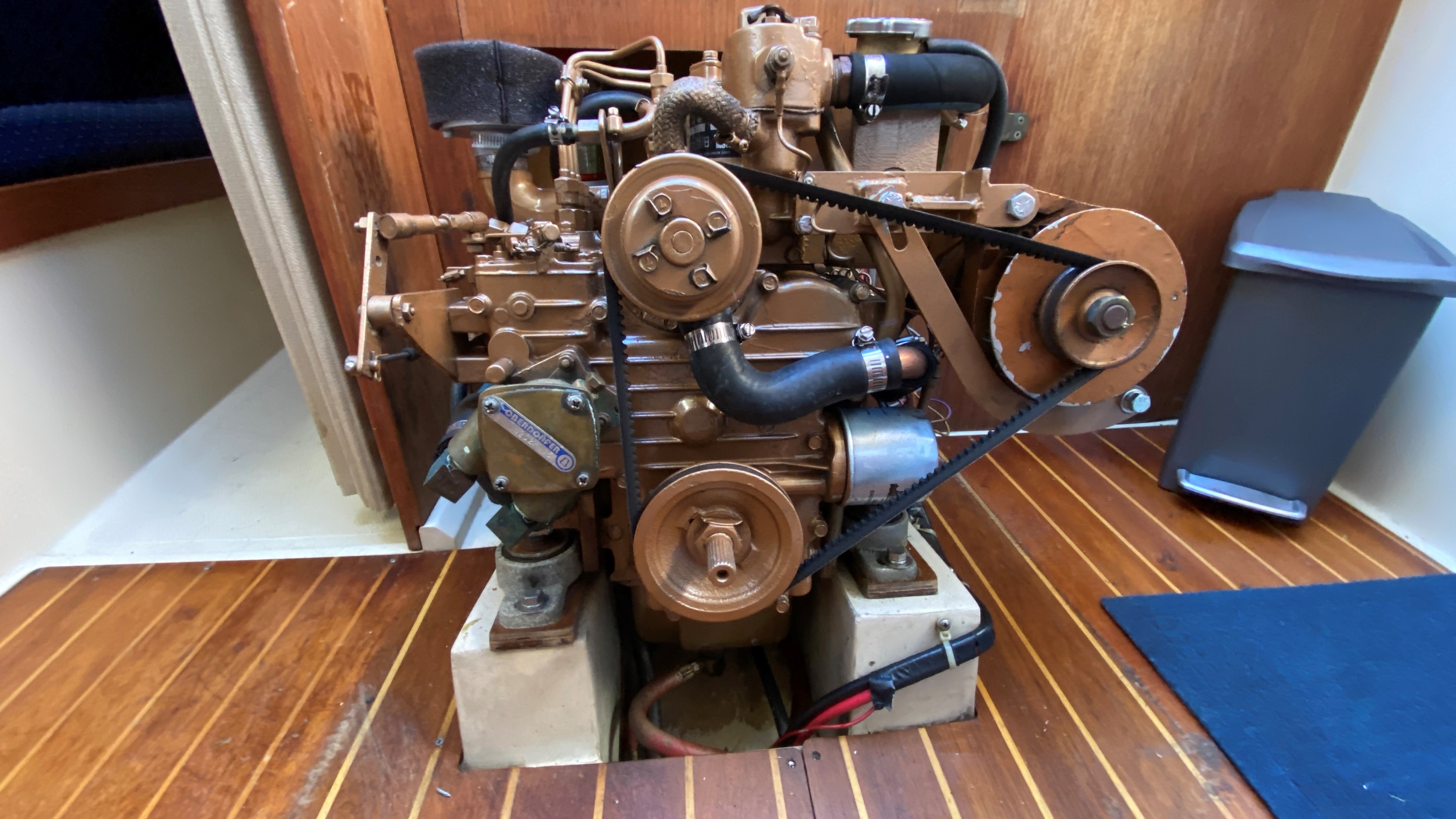 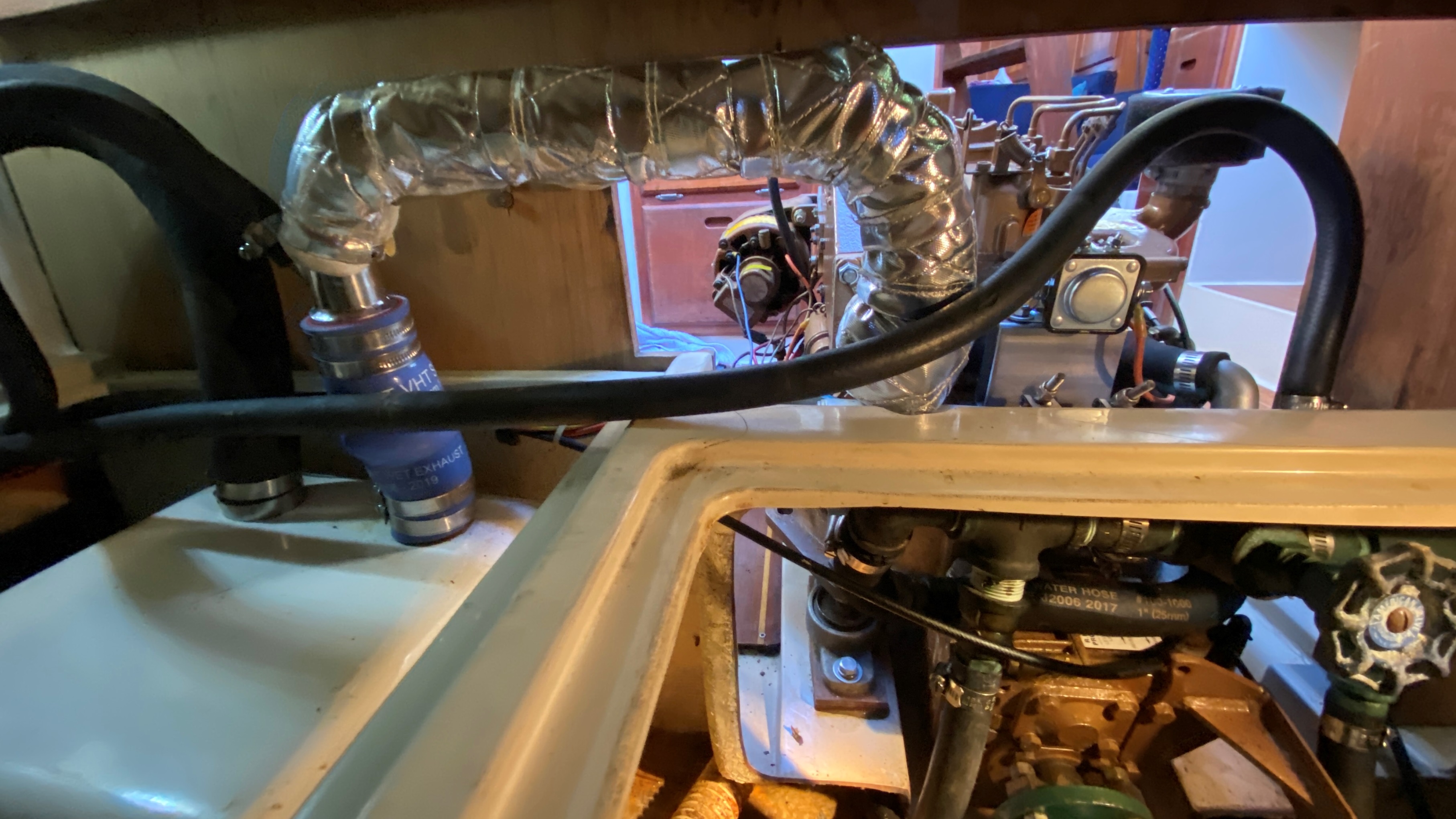 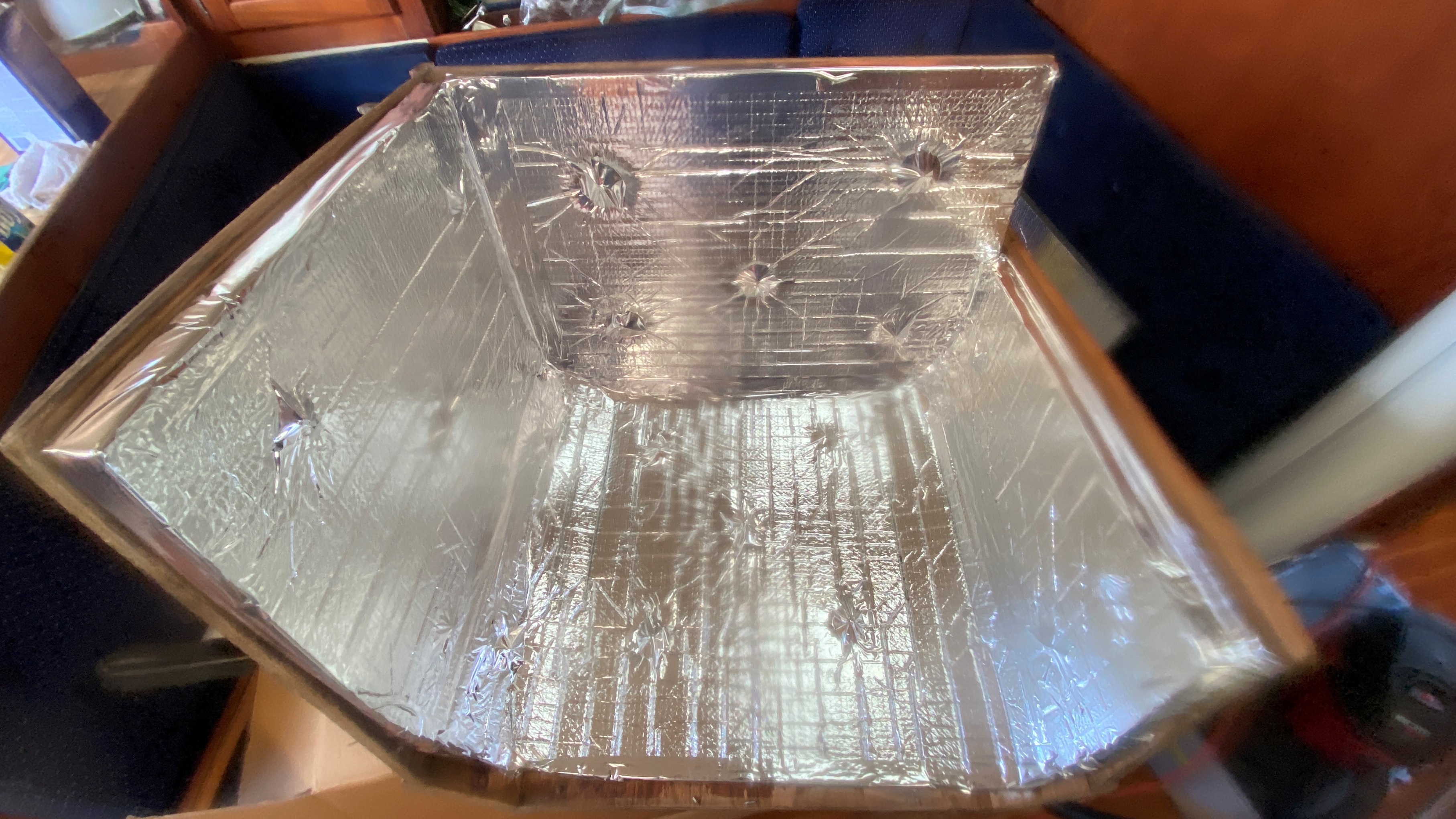 Steve-
Nice work! The engine looks great and congrats on it's improved performance.
Be grateful that the C36 has such terrific engine access. Our C30 had the M25 stuffed beneath the galley sink/settee seat and it was absolutely miserable to work on.
Several of the issues we experienced with our M25 wire harness were within the main connector. The connector design utilized a clear rubber (urethane?) shell that the wire terminals were molded into. We experienced a lot of "invisible" corrosion originating from where the wires were crimped inside the individual terminals. This lead to all kinds of intermittent electrical issues with the gauges and battery charging. I finally removed the harness connector and resorted to soldered connections. The transparent connector was a neat concept in theory, to allow for visual inspection, but the corrosion occurred inside the wire crimps. And, there really wasn't a need  for a harness connector unless you plan on frequently pulling the engine.

Thank you very much for posting those pics. Can you please tell me what you used for the new sound proofing under the engine cover?

My recollection is that I needed to two to do it properly plus some extra hangers and tape.  I epoxied the hangers to the inside of the cover since I didn't want to risk them coming loose ever and I also used a couple cans of 3M adhesive spray.

Cutting the foam was a bit of a learning curve - a very sharp utility knife helped (with extra blades).  I used the miscuts and other random bits on the inside of the corners where they are concealed by the tap so it's not as obvious I struggled with a straight line.

Steve,
Looks like good work! I've recently redone the exhaust pipe, the heat exchanger and the alt. bracket. All necessary work. I'm currently completing the wiring harness work, removing the original connector at the engine and re-wiring. I'd been putting it off, but it did come back to bit me with an inconvenient "no-start"! I highly recommend you put it on the top of your list. One thing you will notice as you gain more experience on the motor, no two are identical!
Cheers!