Hello All,
I’ve been stumped by my alternator not putting out current. I would like your help in diagnosing this.
We recently did a full upgrade of our electrical system based on reading these posts, especially those from Maine Sail and others (thank you!!!!!). Below is background/preamble to the main alternator problem I’ll be asking below: 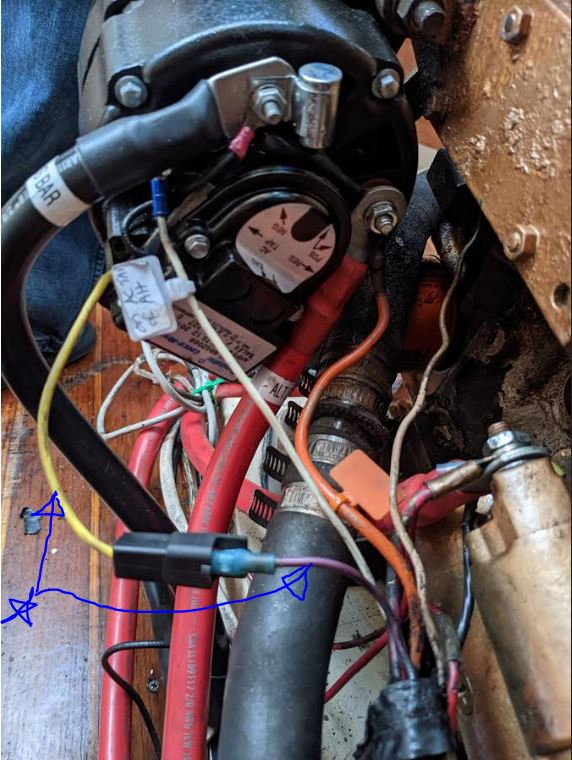 Sounds like our upgrades -- which we did over 10 years, however, not all at once, so good for you!

We replaced the stock alternator just last fall (when it began failing) with a Compass Marine 105 amp alternator (derated via an external regulator), happily there were no alignment issues so it was a drop in replacement.

Anyway, I had some initial issues with the wiring for the new alternator (all the gauges went nuts), and had to go back to basics and try to sketch out a "before" and "after" to figure it out.   I've pasted the sketches below.   As I'm not at the boat right now (its snugged away under its winter cover and a bunch of snow), my response is somewhat from memory.

But, in any event, with the old alternator and the original wiring (well, there had been the upgrade at some point by a prior owner from the "trailer plug" and ammeter setup on the early Mk1s like ours), there were three cables.  One was the heavy cable from the positive terminal that fed the batteries (and originally connected directly to the starter positive post as well), one was a small wire from the stator that ran to the tachometer, and one was a small wire that ran from the field (or "excite") to the key switch at the engine panel (the negative connection was via the case ground).  My sketches don't relate the correct colors, but if I'm remembering correctly the purple wire is the wire that carries the current from the key switch to the field of the alternator, and a grey wire is the connection for the tachometer to the stator post on the alternator.   In any event, I suggest tracing the two relevant wires from the back of the engine panel (i.e., the output side of the key switch and the tach connection) forward to the engine so you can figure out which is which.
Mainesail's "How To" pages at Compassmarine has a picture of the wiring on the alternator here:   https://marinehowto.com/wp-content/uploads/2016/04/03-Universal-Diesel-Wiring-Harness-Upgrade.jpg

Thank you for your help, Matthew! I think I have those drawing but am just not sure which wire is the one that excites the alternator. In your first diagram (your old system), it looks like the blue wire that connects to the ignition does this excitation. I will trace my wires when I get a chance to find out which wire from the ignition connects to the excite wire on the alternator.
Adel

Problem solved. I had not seated the MRBF fuse properly on the fuse bus bar!! There was an open circuit. All is well. Alternator now puts out 55A when engine starts and we rev up to 2000rpm. It was good luck that the alternator did not blow out its diodes upon starting since it did not have anywhere to dump its load. Thank you all for your combined wisdom. Now to change out the solar wires and controller.
Adel