KevinLenard
Offline
Joined: 1/28/15
Posts: 165
Engine cuts out after a few or many hours of running

Fellow Captains, the explanation I've seen for this problem is that it is likely a clogged fuel filter, yet I've changed both the Racor water separator filter and the main fuel filter on the engine (separate topic discusses the mysterious 'third filter' that I so far have been unable to find on my 1991 M-35 unless it is inside the pump assembly and can only be accessed by removing it) and the problem persists.  Starts fine (as far as I can tell as it has always started the same way since I bought her 3 years ago -- needs a little extra fuel to get going, then idles with a pulsing rev up and down a little at about 8,000 rpm) and runs well for anywhere from an hour to 8 hours, then chokes and shuts down as though the fuel has run out.

First time this happened I knew I had sufficient fuel, but added 5 gallons and it started and ran fine for another hour until we arrived in home port.  Next time it happened after about 5 hours and I instead bled the Racor filter and it started fine, then conked out again in 20 minutes and continued starting, running for awhile, then choking out.

I changed the filters, opened the tank and checked for debris (clean as a whistle), yet this season it is choking out after only an hour or so.  I now realized I don't have to bleed the water separator or the fuel line, just restart her and hope for the best -- and she has run well for another hour or two without issue.  I will attempt to dismantle the fuel pump assembly below the injectors today, but there is no obvious 'cup' or in-line filter anywhere on the engine.  (See photos.)

Many thanks for any advice. 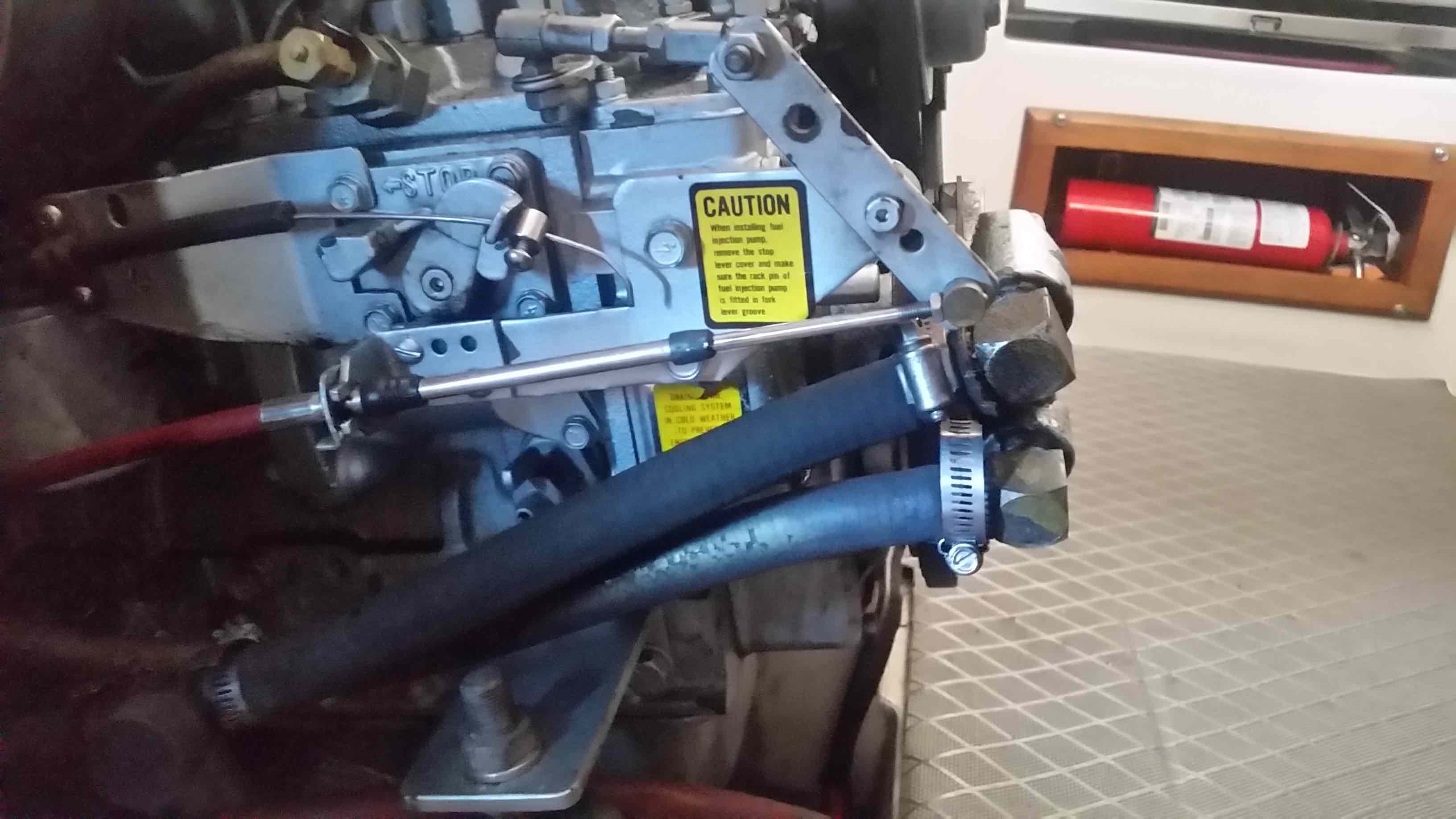 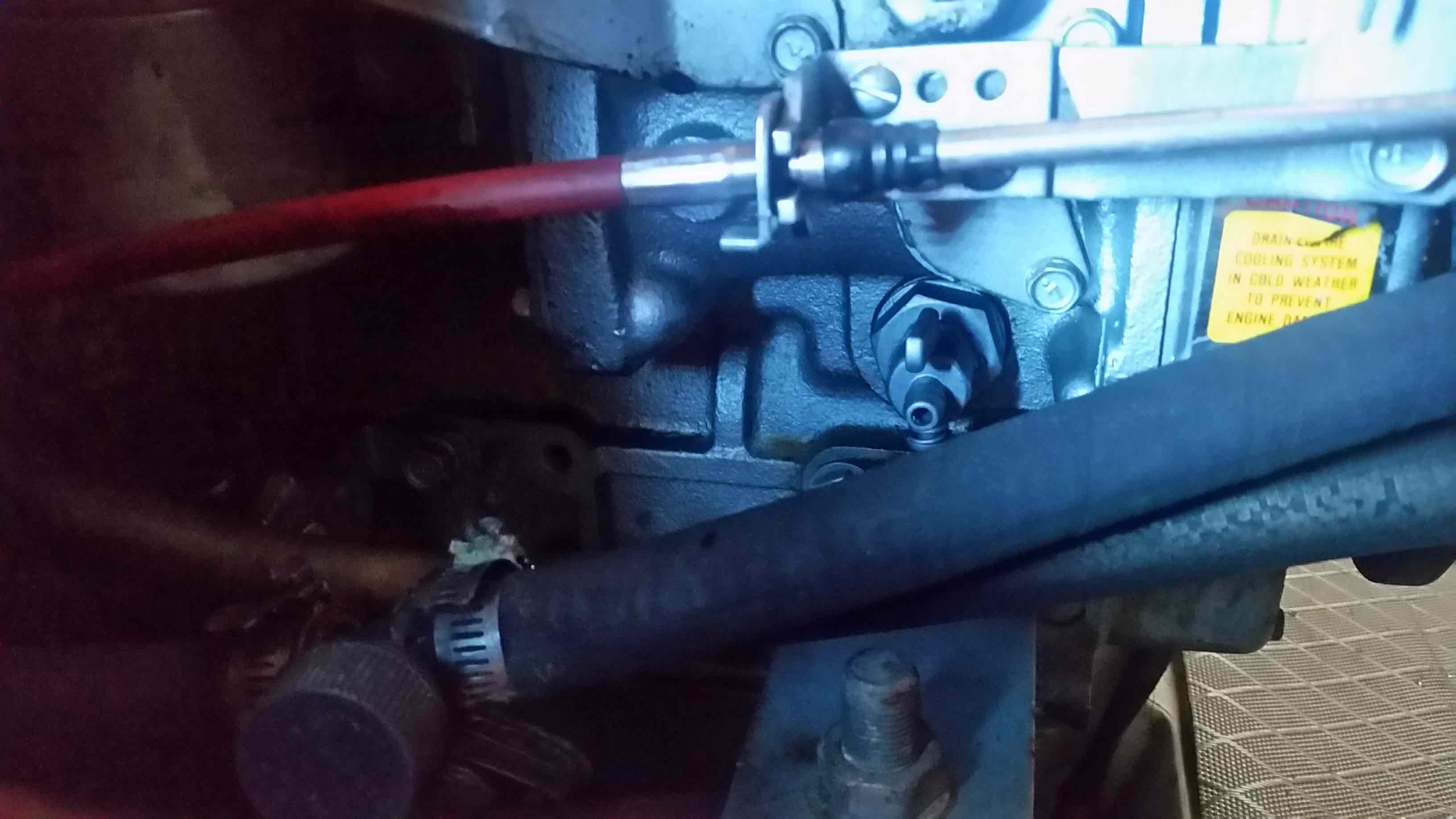 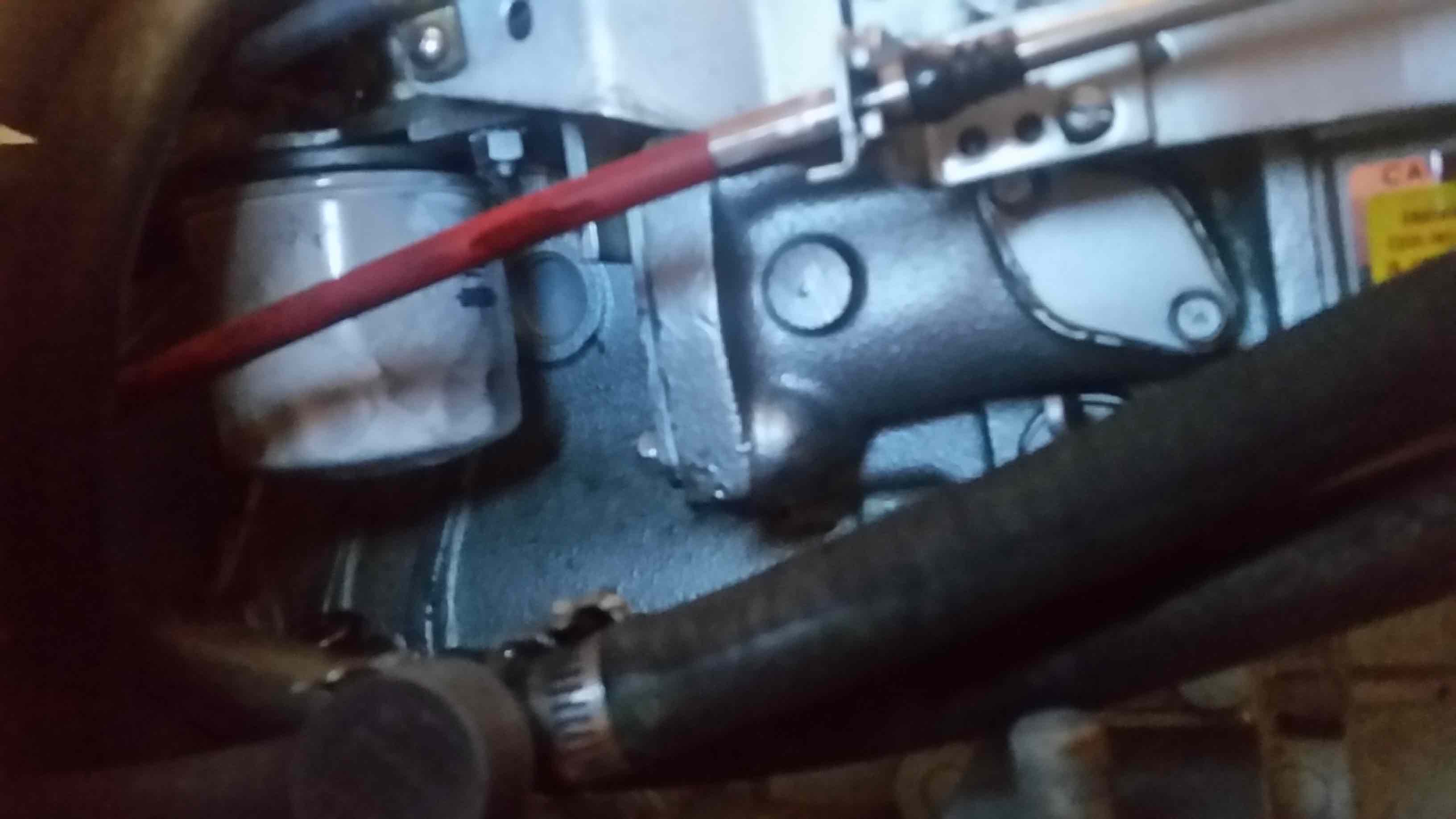 From what I've read on other forums it sounds like you have a fuel pickup that is intermitantly getting plugged off.  Pull the pickup, get rid of any pickup screen. Visually check fuel/tank for big things blowout or replace lines running from tank to the racor

Thanks Les! I'm going to trace every possible problematic spot in the flow route.

I think I'd install a vacuum gage on the suck side of your racor. High vacuum reading would indicate a restriction.
​Check your electric pump out. Maybe it's failing?

Thanks, Chuck.  I'll look into a vacuum gauge, but if it could be the pump that's not an expensive thing to swap out and try so I'm going to go that route and have the existing pump in reserve.

Clennox has a great point with the electric fuel pump, you need to make sure that it is working properly.  When electric fuel pumps begin to fail, they may cut out at random times and starve the injection pump.  It could be something as simple as a bad electrical connection or a dying pump. If the fuel tank being drawn below a certain level is common to the symptom, it may be the the pump is wearing out internally and doesn't have the necessary lift anymore. For sure if it's a fuel starvation issue, you want to address it as insufficient supply is not good for the injection pump.

Also, make sure there isn't a leak (pinhole, cracked hose, bad clamp connection, etc) in the suction line to the electric fuel pump or the pickup tube, as entrained air is terrible for a diesel injection system.  Fuel aeration can cause similar symptoms to what you've described as air collects in the system, as well as excessive white smoke from the exhaust.

Thanks Dan.  I checked for leaks and found none, but something else occurred to me while changing out the filters yesterday.  On my engine I have a brass fuel bleed valve fitting that has a tube going up the the main injector housing (see photo below).  While the shut off knob has broken off and I need to replace the valve stem and knob, this appears to be a self-bleeding feature when open.  It was permanently open during the last seasons, however, and I wonder whether this may have allowed air into the system?  After running the engine for some time yesterday following the replacement of the fuel filter I shut this valve and the engine seems to run fine with it closed.  I'll buy a new external fuel pick up pump and will leave the self-bleeding valve closed and see if I still have this intermittent problem.  If it happens again I'll replace the fuel pump and see if that fixes things.

I'm not familiar with a self bleeding valve on any diesel engine the size that we're dealing with.  Does the M-35 manual tell you to keep that valve open?  Until you get into much larger engines, the valve on the injector pump is usually dedicated to priming the system after maintenance.

If the lift pump isn't performing up to par, that valve could definitely contribute to a performance loss.

Thanks!  I didn't fully absorb this comment of yours until rereading.  So my problem was that bleed screw/valve being open.  Thanks for pointing this out as I HATE intermittent mysterious issues.  I'm replacing the broken knob and will keep it closed after bleeding post filter changes.  K.

I had an intermittent issue with my M35-BC engine. It would cut out if the filter was plugged, but they weren’t. Turns out the electrical lead for the pump had broken at the connector and the zip tie was holding the lead in the wiring harness. You may want to check that the pump is getting power when it happens again.

I'm in the pump failing camp too (or bad electrical connection). Next time the engine cuts out, send someone below to remove the engine cover and listen to the fuel pump when the key is turned on (but don't start the engine); I think there should be some noise coming from the fuel pump. (Our M25 pump had constant clicking when it was activated. I'm not sure of the sound on the M35). Even if the engine is running fine- have that helper move the wires and connector around to see if the pump shuts off.

I have had my boat for 22 years.  When it was less that 2 years old I would run the engine for about half hour to 45 minutes and then it would stop.  Like it was starved for fuel.   I change separator filters secondary filters more than twice when it dawned on me that if the boat sat for about 10-20 minutes it would start and go another 30-40 minutes.  I finally got the idea to look at the fuel tank vent fitting on the stern.  Mud Dauber Hornets had built a little mud nest in the vent outlet.  It had plugged the tube and was causing a vacuum to where the fuel couldn't flow to the fuel pump.  Cleaned the vent and solved the problem.  Sometimes the most simple stuff can kill you.

I had the same problem... went thru all the filter changes but nothing helped.

The fuel line comes from the tank into the water separator filter thru a connector that makes a 90 degree turn into the filter. The clog was in this 90 degree connector. You may have to take off the filter to get this cleaned out but you can try taking off the line and cleaning out the connector with a pipe cleaner.

Wow!  Thanks C36 Team!  I now have a very thorough list to go through.

I think that covers everyone's suggestions/solutions.  I'll report back after this weekend's trip across Lake Ontario.  Many thanks!

The knurled knob bleed on some M25's should be closed according to the manual but most of us run them a qquarter turn off closed.  Closed the engine should keep running inf the lift pump fails.

Thanks Les.  I didn't find any mention of that feature/knob in the manual.  My bad.

Well she ran fine (other than a self-made disaster on the return -- see "mysterious third fuel filter post) for 4.5 hours after having the fuel starvation issue after just one hour a few weeks back.  The only major change I made, other than changing the fuel filter again (but the problem happened after putting in a new one last year) was to shut that self-bleeding valve entirely.  I suspect (though we're leaving for a 2 week trip to the 1,000 Islands next week that will see her get a real test) that with that valve totally open she was gradually sucking some air that intermittently would starve her of fuel.  We'll see...

Took her out for a two week cruise to the Thousand Islands and experienced almost no issues.  The former 'choking out' problem is gone, either due to closing the air bleed valve (most likely I think) or changing the gas filter (less likely as I'd done this last summer with no change to the issue).

The engine does tend to shut off if I slow it to a low idle after running for several hours, especially if I panic and take her out of gear before slowing it down completely.

Many thanks for all the advice.  I have a long checklist now!

In Sept 2020 on a trip from San Francisco to Santa Cruz in 8 foot seas and 40 knot wind near Ano Nuevo ( 20 miles north of Santa Cruz), the engine RPM gradually decreased and finally stopped. I restarted it and put back in gear but in a few minutes it died again. I found if I did not revv-up the engine it would continue to work.
At the doc I was able to locate the blockage that caused the starvation. As all others have pointed out it is the primary filter.
I removed the mounting bracket out to try and clean it - but it is not necessary. Just remove the cap on the top of the primary fuel filter and clean the accumulated residue. You may turn off the fuel tank valve and disconnect the incoming fuel line and clean the 90 degree angle. I used curtain pull string to clean the path. It all worked fine after this cleaning and replacing of both fuel filters.
For more content visit http://mei1970.org/saillavie
Haro.

Have you checked the electrical connections and/or condition of your low oil pressure sensor?
This was a reason we found for spontanious stop of the engine.
A bad connection (or even a bad wire) causes the electrical fuel pump to stop with result stopping the engine.

That is also possible, but removing the blockage fixed the problem.

I would start by COMPLETELY draining your fuel tank and fuel lines. Pump diesel it into a few yellow plastic tanks and take to a hazarsdous materials dump site for processing.  YOu could have sludge or water build up in the tank.  My understanding is that few, if any of the "dessicant" additives really work.  Buy your diesel from a high volume (major truck stop) source so you know it is fresh.  Also, if there is a fuel tanker truck filling the station, come back a few days later as most likely the filling up of the truck stop tanks could stir up crud in their tank.  I just learned this the hard way about water in the fuel tank on an outboard motor.  First repair shop told me the old Evinrude motor would make a fine boat anchor, based on compression test. Thankfully there was no charge.  A good old boy close by that works on small engines in the evnings drained my fuel tank and showed me 1" of water in a large mason jar.  Then dried out the tank.  Fresh premium fuel and she runs perfectly.   Do the simple things first...

All of the above are goods places to investigate and fix.  I have, however, two experiences that were completely different.

Not all problems are related to the fuel and filters.