Malu Lani, on the Columbia River 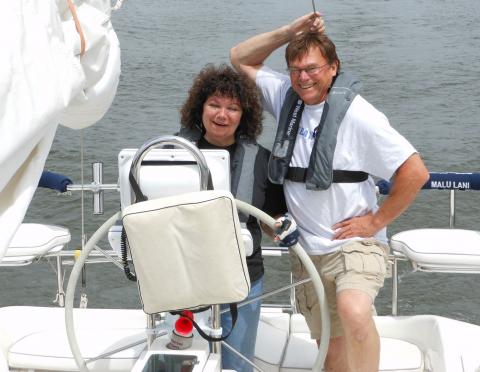 New C36IA Members Mike and Sandy Wilson are fairly new to boating, having learned to sail in the past year. It won’t surprise you therefore to learn that they are new to the Catalina 36, and new to Pacific Northwest waters as well. So when I found out that their C36 Mk II, S/V Malu Lani, was being shipped from California to Portland, Oregon, I offered to assist them on their first voyage from the yard to Malu Lani’s new home in St Helens, about 30 miles down the Columbia River.

On such a wonderful day and with such nice people, the experience popped the lid off of a box of warm memories of our accepting delivery of S/V High Flight, and our initial voyage on it.

So helping Mike and Sandy was a treat. The departure was, of course, dependent on the yard bill being settled. Mike said that the Schooner Creek yard did a great job, treated him very well, and that he got good value for the money. There’s no praise higher than that for a boatyard, I figure. 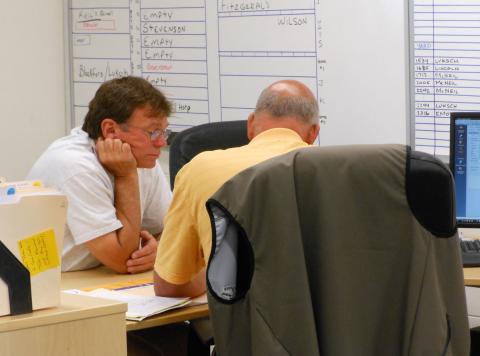 Once the paperwork was done, we asked the yard how soon we had to vacate the slip. “No problem,” they said. “Take all the time you need.” That gave us the luxury of going through the boat from stem to stern, checking through-hulls, making sure that all the USCG required equipment was on board, and talking about various systems. 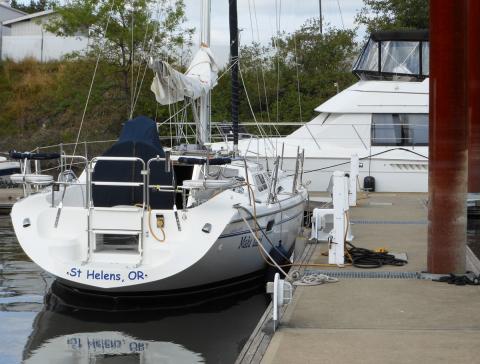 Finally, it was time to push back.

Along the Columbia there are few places where the current does not rip. Fortunately the small basin of the boatyard was one of these protected oases. So we backed out carefully, and entered the Columbia River, crossing beneath the I-5 Bridge, and then called the Vancouver Railroad Bridge for an opening. We lucked out, because a tug and barge had just forced the bridge opening. Once through the Railroad Bridge we were on our way.

To make the trip more interesting (and more challenging, from a training perspective ), I suggested that we depart the Columbia River, do a small jog up the Willamette River, then take the ‘back route’ through the lovely and peaceful Multnomah Channel. Reminiscent of a European canal, this gorgeous channel is too small for ship traffic, has only the occasional tug/barge, but lots of floating homes. The owners of these homes seem to compete for the most spectacular geranium displays. And the miles of rural countryside bordering the winding channel offer a peaceful, quiet adventure that is a highlight of the Oregon cruising scene. 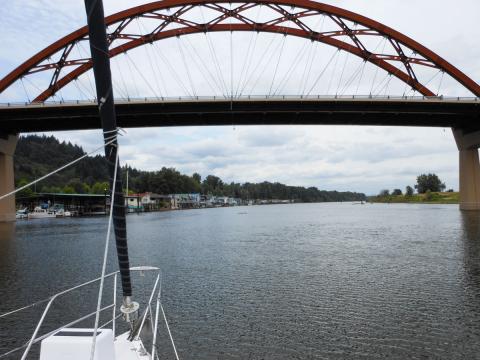 Once in the Channel, Mike and Sandy were faced with their first significant navigational challenge…the Sauvie Island Bridge. The spring runoff had been exceptionally high this year, and although the waters were receding back to near normal levels there was still some worry about clearance under the bridge. The worry was easily resolved, because there is a clearance gauge painted on the bridge abutment that gives the boater unmistakable guidance. We had no problem: according to the gauge we would have about 6 feet to spare. We’ve all been there…even though we read the gauge, the nervous glances aloft, slowing to a crawl, imagining the mast toppling…and once through, a sigh of relief. Hey, a piece of cake.

Then on to St Helens for a little docking practice, when even their instructor learned something in the riproaring current. Hey, no harm, no foul. They say the best way to learn something is to teach it.

Congratulations Mike and Sandy. We wish you a lifetime of discovery and joy on your new Malu Lani.

Tags:
Met Along the Way