Godspeed is an expression of good wishes to a person starting a journey.
It is also the name of an historic vessel. Godspeed, under Captain Bartholomew Gosnold, was the name of one of three ships that set sail for the New World in 1606. The journey resulted in the settling of Jamestown, VA.
Before this journey, however, Gosnold had sailed to New England in 1602. While traveling the coastline from Maine to Massachusetts he is credited for naming Cape Cod, as well as, Martha's Vineyard ( after his deceased daughter Martha and the wild grapes that spread across the island). Gosnold also established a post on the Elizabeth Island of Cuttyhunk, a place I spent many weekends in my youth.
Finally, my sail number 413 is complimentary to the name Godspeed. Philippians 4:13 is a powerful, uplifting passage of optimism and faith. It is also the name of our inflatable. 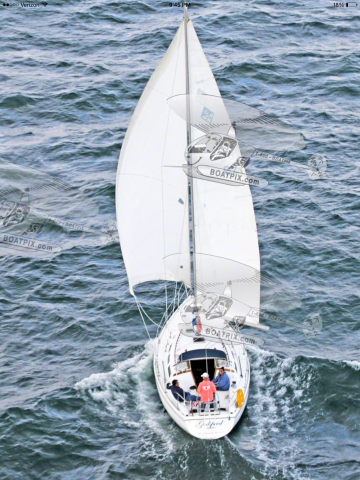